Music is primarily an aural experience. But of the other senses, the visual is next in line. Listeners have long been fascinated with ‘watching’ the music – seeing musicians ‘get into it’ with body and soul, focusing on flying fingers, following along with a score, and reveling in synchronous dance movement. The eyes help to reveal the music – its substance and its structure.

On our watch, since the new millennium, technology has afforded us new possibilities for keeping an eye on music. I have been drawn to these whenever they’ve come to my attention, and have been bookmarking them for two decades. Here, finally, is a place where I can share my fascination. The music is almost all Bach.

By clicking the Title link you can watch the video in it’s full context (often with some preliminary ads). Or you can open the lightbox video player and skip the ads by clicking the picture. Please do share this collection with your musically inclined friends. Perhaps some of them will be able to help me expand the selection.

My musical sense was formed, literally, at the feet of an organist. As a child, I would go with my father to one or another of the churches he played for and sit in the organ pit during the service. This is a photo of Herman at the organ of Knox Presbyterian Church in Goderich, Ontario, sometime during his tenure there from 1959 – 1962.

Also in the list of churches where he played are; St. George St. United in Aylmer, Our Savior Lutheran in Port Huron, Congregational Church in Port Huron, St. George’s Anglican in Sarnia, St. Andrew’s Presbyterian In Sarnia, Second and Redeemer CRC in Sarnia, Trinity and Covenant CRC in St. Catharines and St. John’s Anglican in Thorold. Earlier on, from the age of eleven, he played in the Blijham and Winschoten churches until he emigrated from the Netherlands to Canada at the age of 21.

Unfortunately, there is no video record of my father playing the organ outside of family hymn sings in our living room. So the vision of our memories will have to suffice. 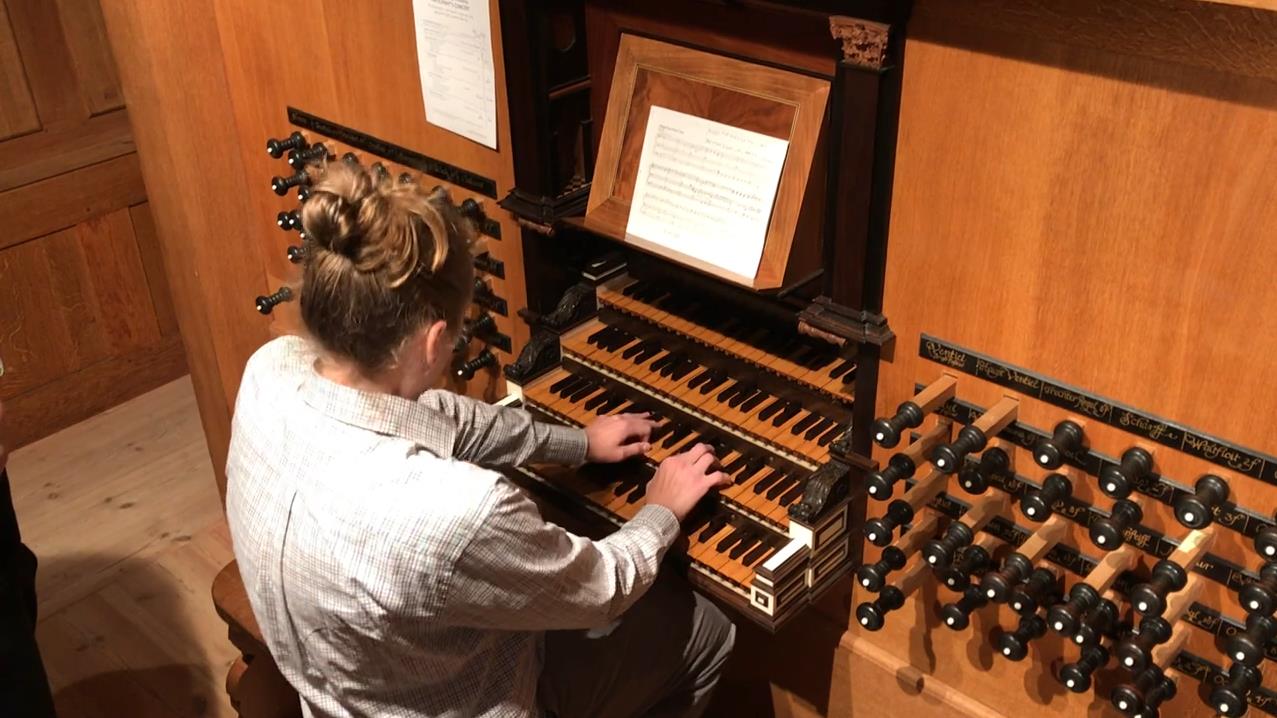 A great deal has changed in the eighty years since my father started playing organ. Musical taste has certainly veered away from organs, but the organs themselves pay no heed, enduring by virtue of their magnificence and continuing to cajole musicians into becoming organists. Within the last couple of years, my own nephew – a grandson of Herman de Jong – has put his feet to the pedals and is now in his first year of organ studies at Oberlin College. For me and my siblings, five of whom are keyboard dabblers who did not step into their father’s shoes, this is a welcome development. I expect to ‘see’ much of his music in the years to come. 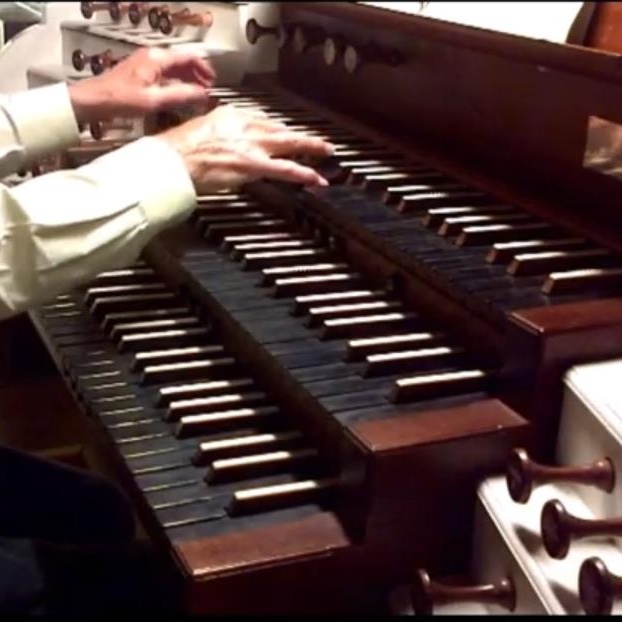 This viewpoint is as old as the music itself. At concerts I like to sit where I can see the keyboard. This accomplished organist, Jan Overduin, is a well known member of the Dutch-Canadian community that I grew up with. His comments on the music, sub-titling the video are valuable.

From the gerubach YouTube Channel, home of the “Scrolling Bach Project”, aiming to provide “a free online library of Bach’s entire collection of his compositions in a scrolling format.” 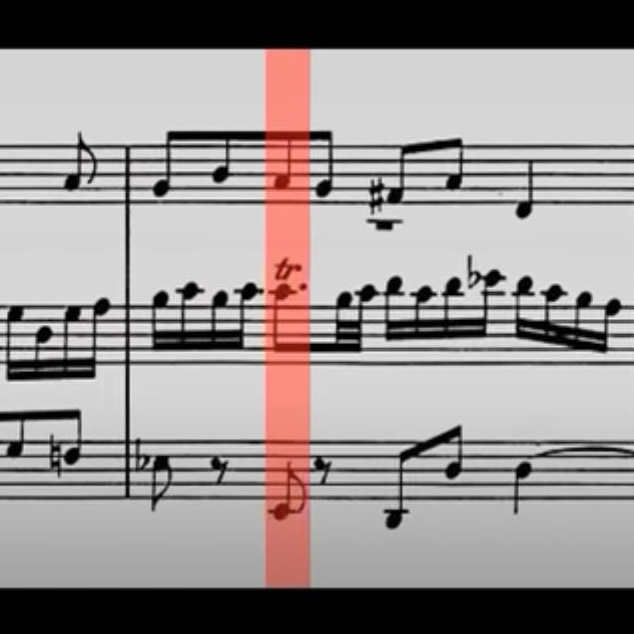 Syncing a view of the score with a recording of the music is, by now, rather old hat. But it never loses its capacity to augment our enjoyment. Especially for fugues, visual separation of voices is a great aid to keeping track with our ears. Keep in mind that the keyboard player’s view is much more complex. If you focus on the moment (the red bar here), while playing, you’re sunk. With fingers remembering the moment your mind’s eye needs to be looking a bar ahead already.

From the Paul Barton YouTube Channel, featuring a wealth of his paintings and piano performances – many melded with their scrolling scores. Among these are Bach’s Preludes and Fugues 1-48, Complete Two Part Inventions and Sinfonias, Goldberg Variations, and much more. 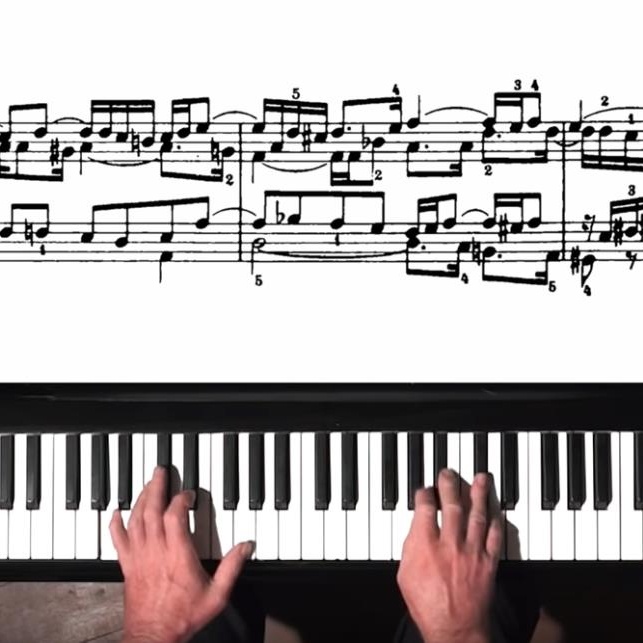 Combining a synchronized view of the score with an overview of the keyboard and hands has to be better than either or. This particular realization is one of a whole series like it.

From the Digital Bach YouTube Channel, recently constructed to feature visualizations originally posted on bach.nau.edu. It includes the 48 fugues from the Well-Tempered Clavier, as well as a visually (text and graphic) augmented performance of the entire St. Matthew Passion. 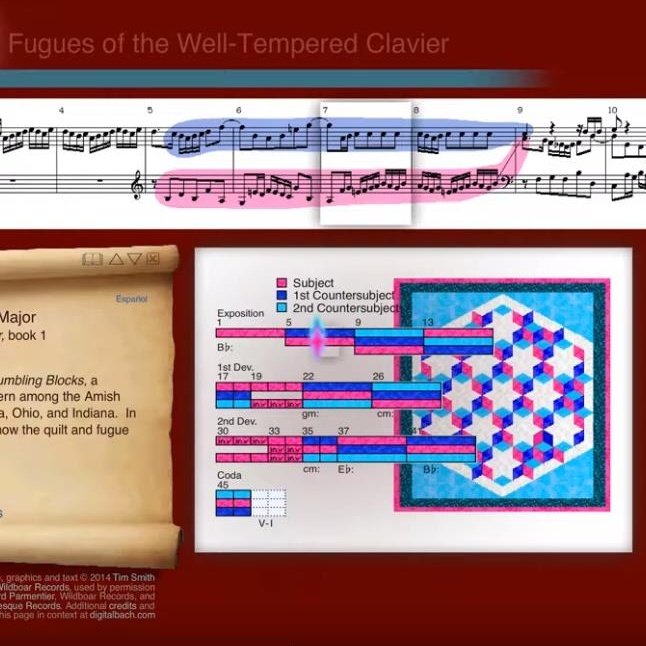 Very early on in the internet era, I came across the Bach fugue animations of Dr. Tim Smith. They were as endlessly fascinating to me as Bach himself. Having studied counterpoint with Samuel Dolin and fugue writing with Michael Kearns, I loved this added dimension to my understanding. These Flash animations have disappeared, along with Flash itself. After some digging however, I discovered that the animations were immortalized (I hope) in YouTube videos. The complete set of animations of Bach’s 48 fugues from his Well-Tempered Clavier (I and II) are supplemented by Timothy Smith’s thorough, scholarly and accessible analyses. The animations themselves are just as delightfully diverse and whimsical as Bach himself.

From Stephen Malinkowski’s smalin YouTube Channel which features the “Music Animation Machine”. The music animations are innumerable, and many of them are of Bach, including the Brandenburgs, Art of the Fugue, Well-Tempered Clavier and Goldberg Variations. 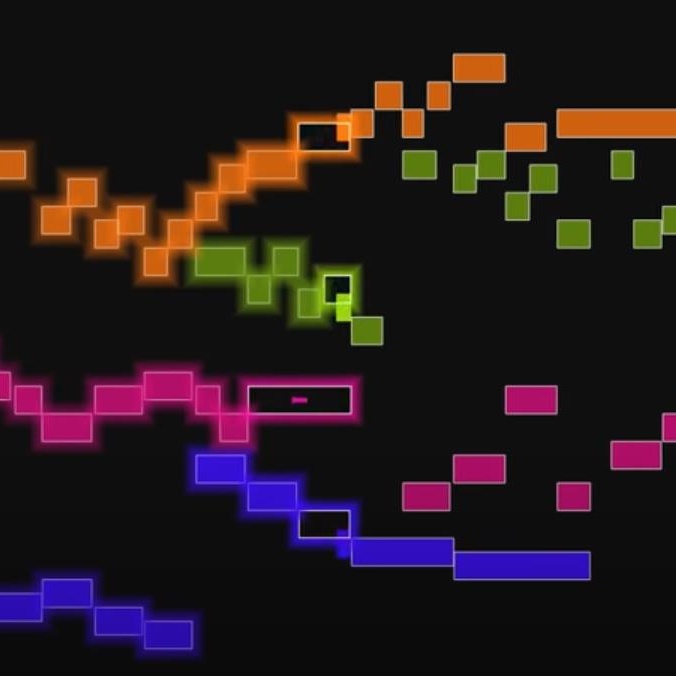 Bach, The Art of Fugue

This page of descriptions and analyses complements Stephen Malinkowski’s “Music Animation Machine” versions of The Art of the Fugue.

The fugues and canons are treated with a wide variety of animation styles and methods.

From the Rousseau YouTube Channel, featuring a wealth of modern, Romantic, Classical and Baroque music brought to life with his “reactive visualizer”. 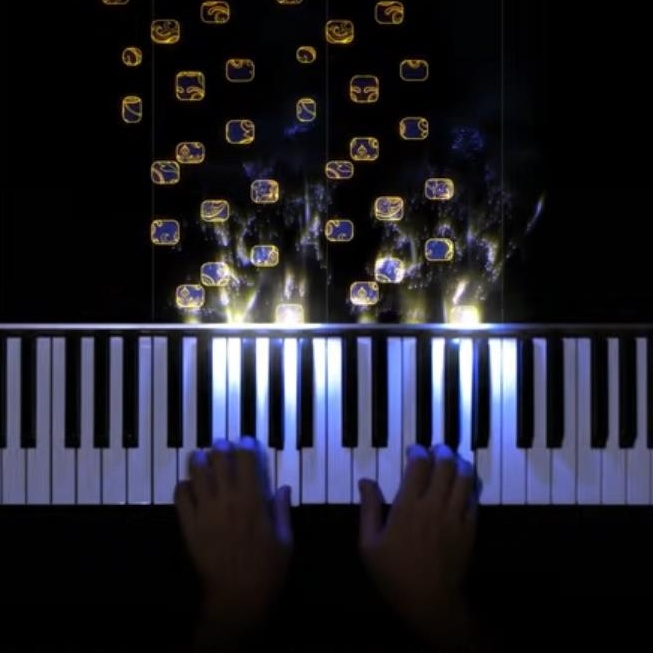 This is one of a large series of mostly Romantic and Modern pieces recorded with a ‘reactive visualizer’ by Rousseau (not the philosopher). These are definitely cool. 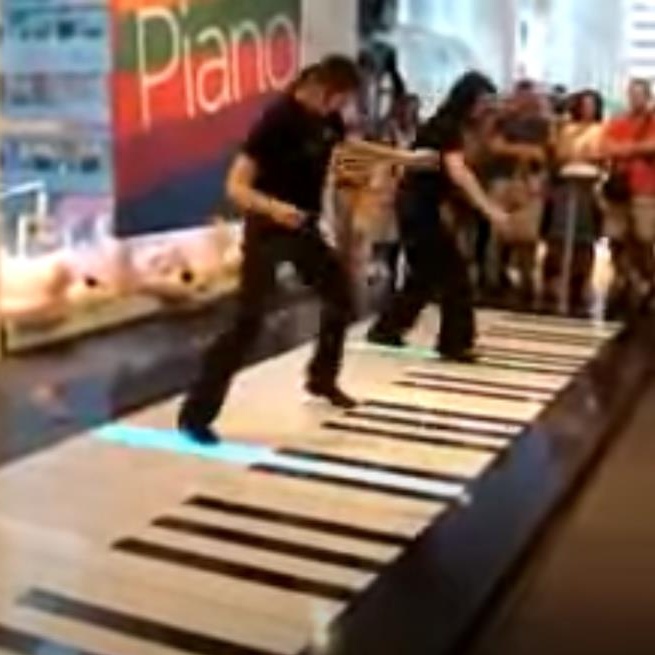 Some people probably think that this is the only organ piece that Bach ever composed. It does make for a crowd-stopper in a shopping mall, and the foot piano (keyboard writ large) combined with the athletic dance of the two players makes for a great visualization of the music’s irresistible sweep. 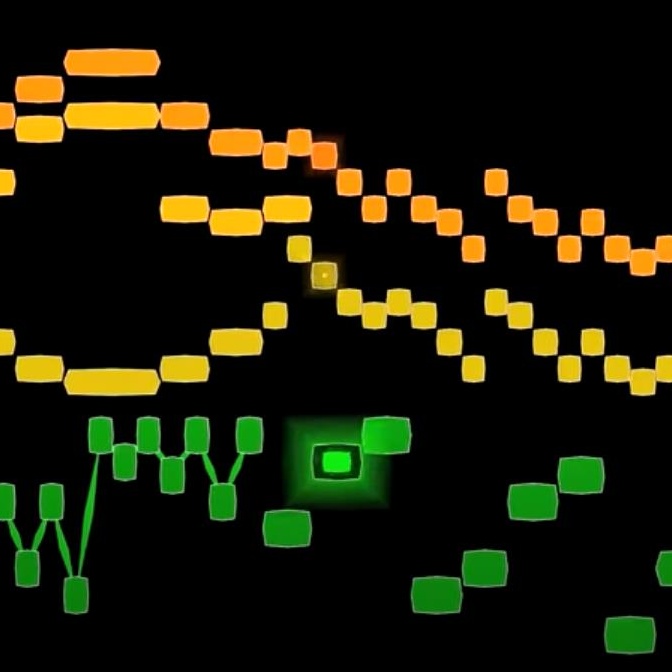 This animation fairly pulses with the energy of the music.

What Would Bach’s Music Look Like in 1950s Neon? 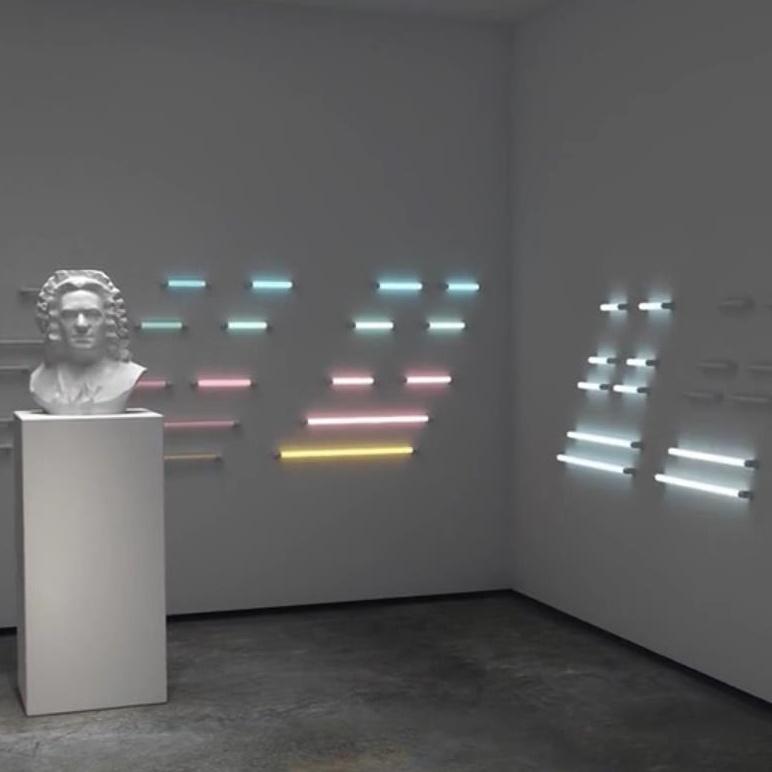 This is definitely the most sophisticated music animation I’ve seen, adding another visual dimension to bring music into the realm of galleries. Believe it or not, the gallery is also an animation.

From Jos Leys YouTube Channel, which is devoted to animations, music only incidentally. 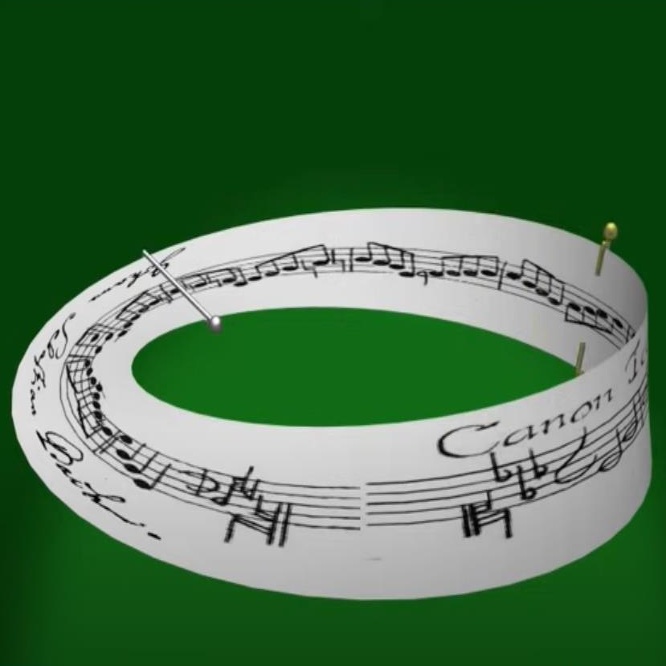 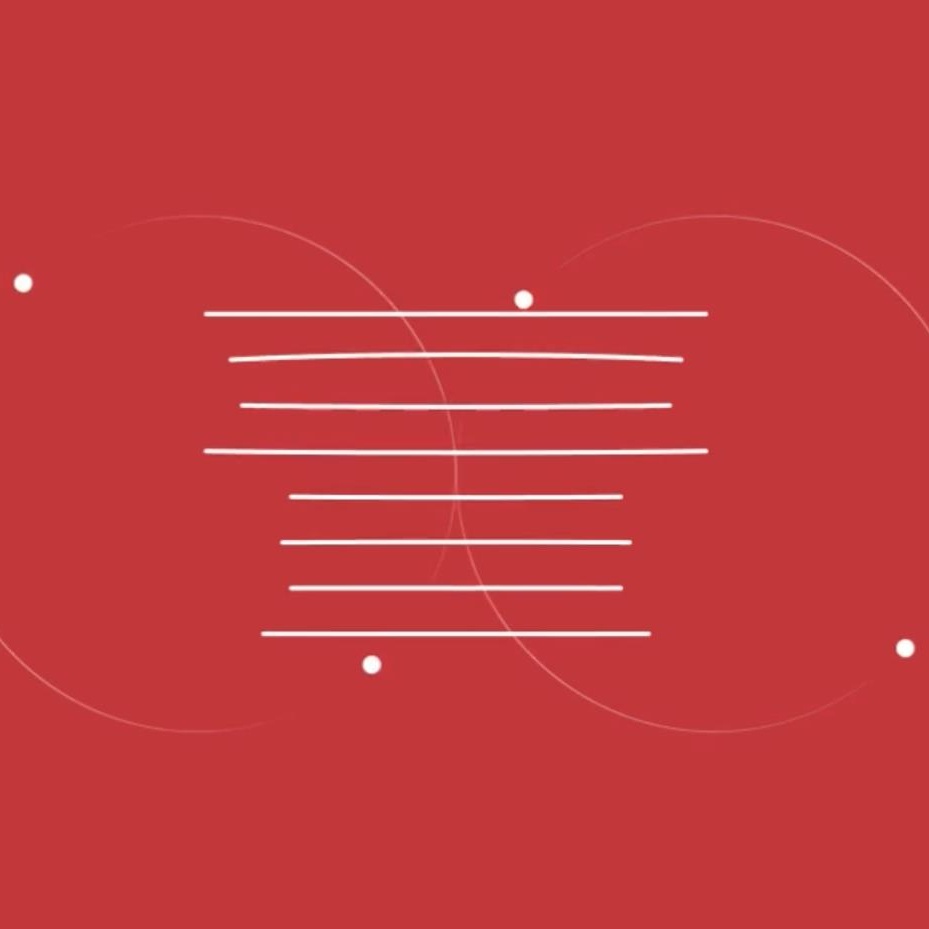 This might seem like the most abstract of visualizations, but it is actually a ‘realization’ of the music – representing mechanically rhythmic pluckers with evenly spaced, length-changing ‘strings’. Here the music is produced by the animation, not superimposed on it.

Another one from the Music Animation Machine. 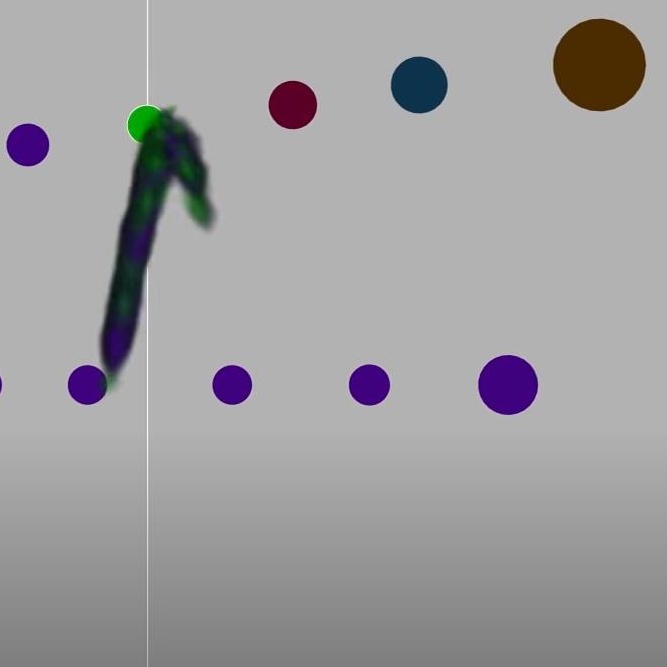 Another visualization of Bach’s first Cello suite, 1st movement has a much more organic, vital feel to it.

A sculpture, somewhere in Germany, representing a single work of Bach, produces no sound but does engage the other senses of anyone who cares to pass through it. 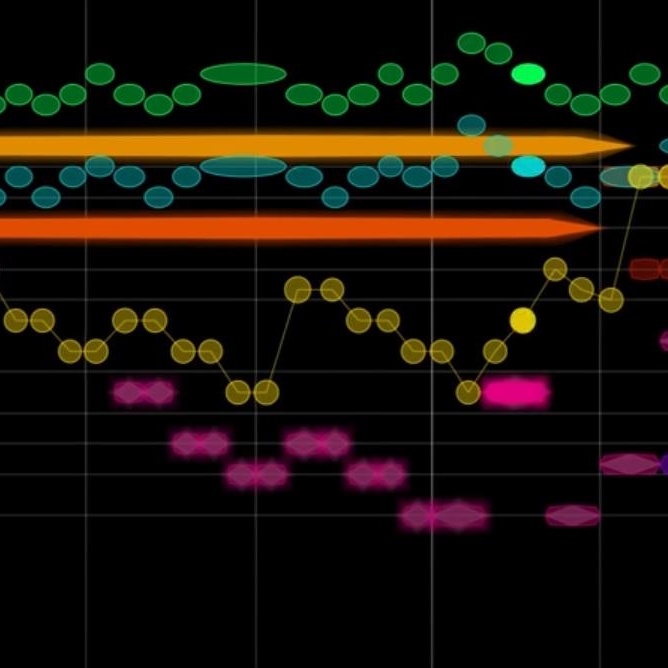 I can’t resist adding another Music Animation Machine production because it’s one of my favourite instrumental works and (authentically) employs two alto recorders. (The recorder is my instrument of choice.)

Bach, Canone per Augmentationem in moto contrario, Art of Fugue 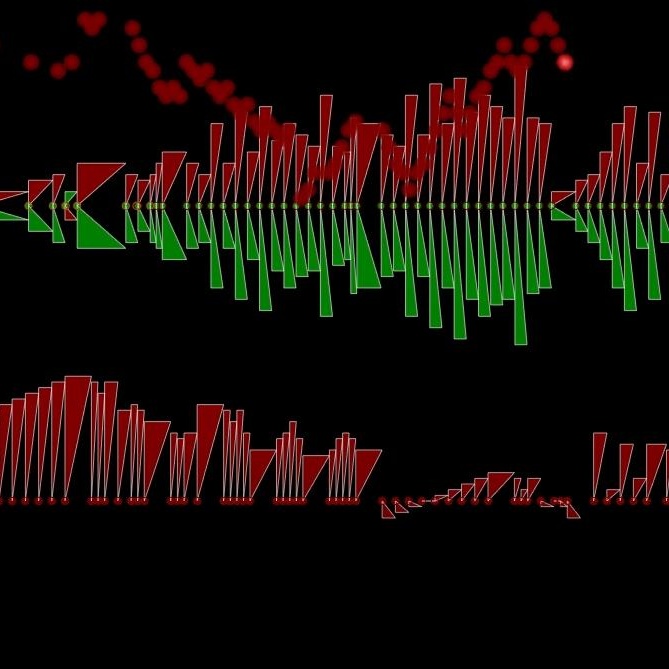 The angular graphics of this visualization by the Music Animation Machine makes for an interesting counterpoint to the more common linear versions. 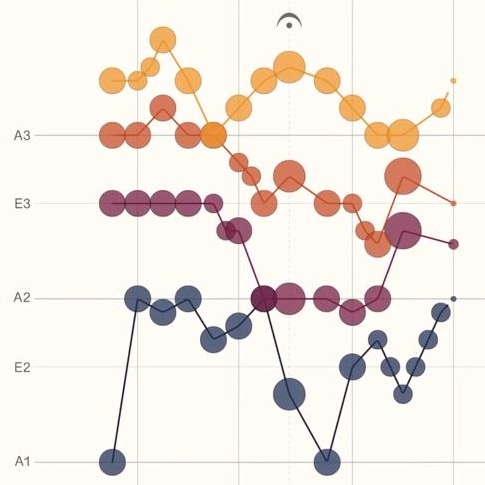 Years ago, I spent a great deal of time analyzing the 371 Bach Harmonized Chorales in my Riemenschneider edition. This visualization doesn’t do much for understanding the harmony, but it does highlight the counterpoint nicely. 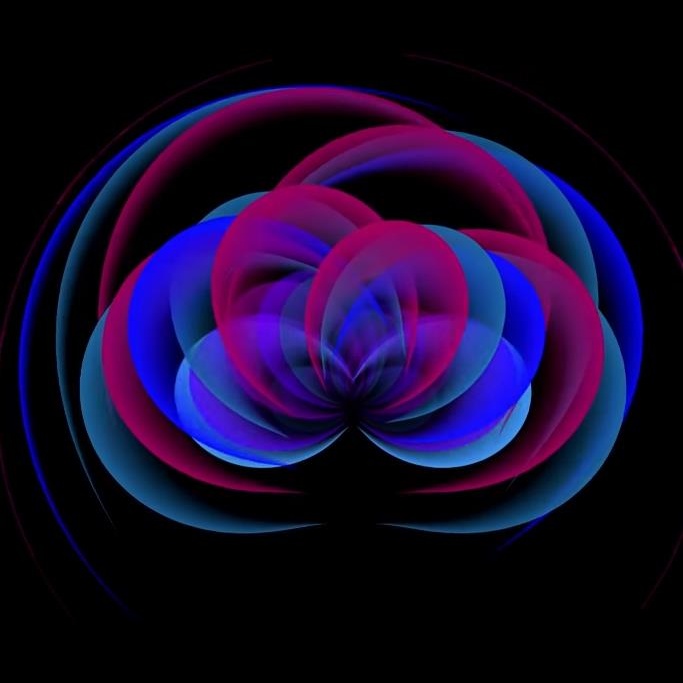 This, again from the Music Animation Machine is probably the prettiest of visualizations that I have seen. It reminds me a lot of the original, Windows, curves screen-saver

Please do suggest additions for this collection.

Mass in B Minor

This 'Visual Studio' for Bach's Mass in B Minor was created for the occasion of my third singing of this masterpiece with Chorus Niagara in March of 2009.

Bach's St. Matthew Passion - an online, visual, interactive presentation of a translation of the text, developed in 2000 for the Chorus Niagara concert.