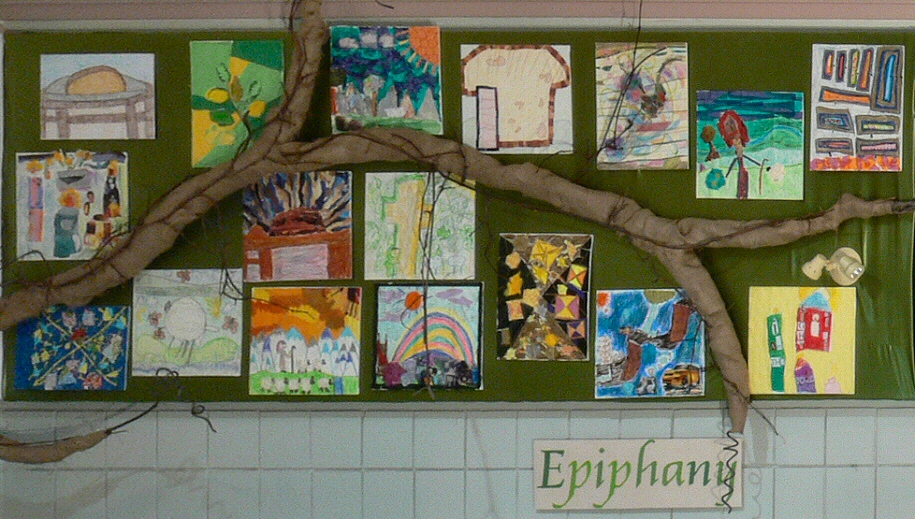 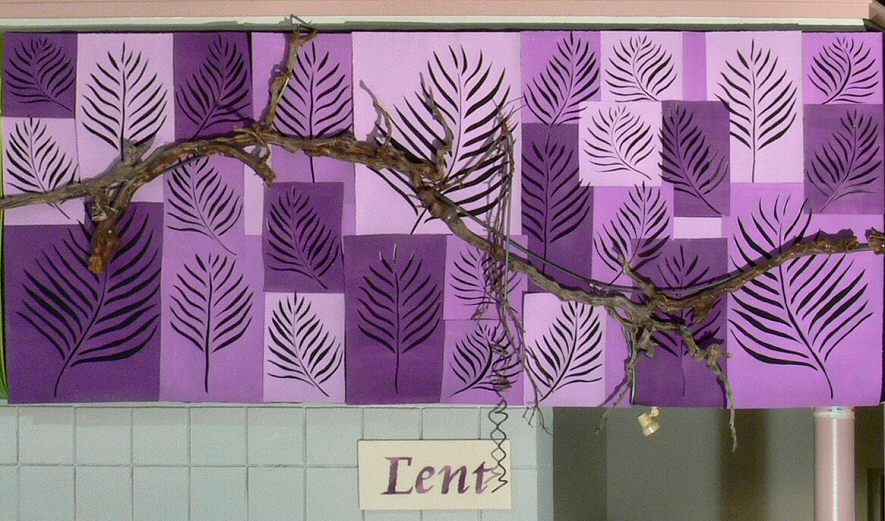 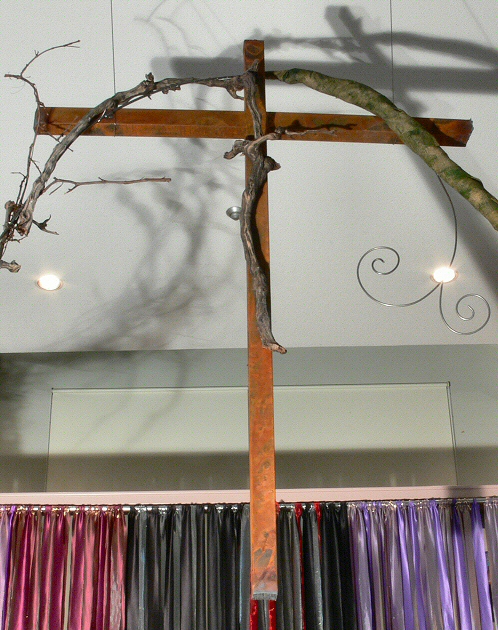 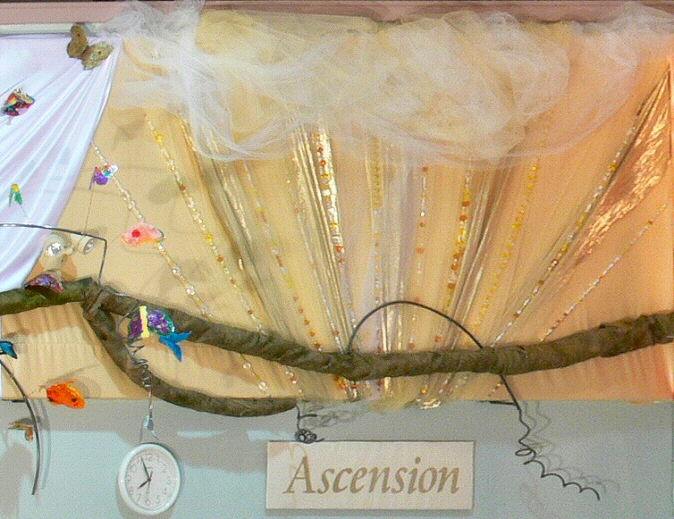 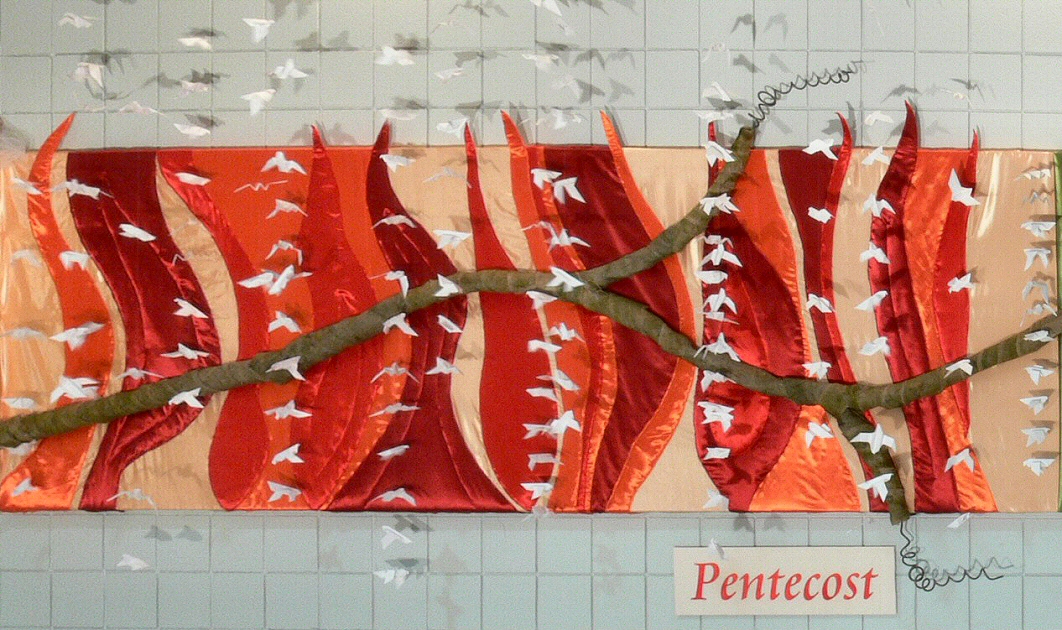 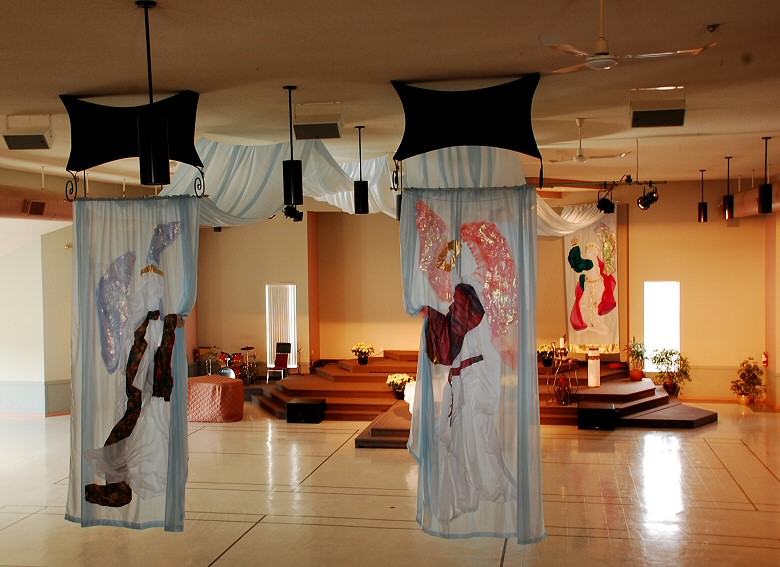 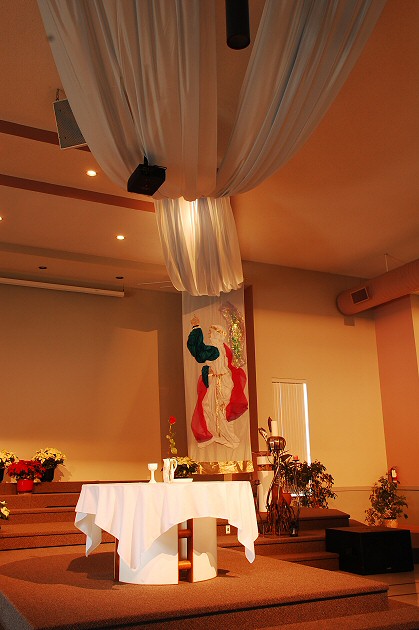 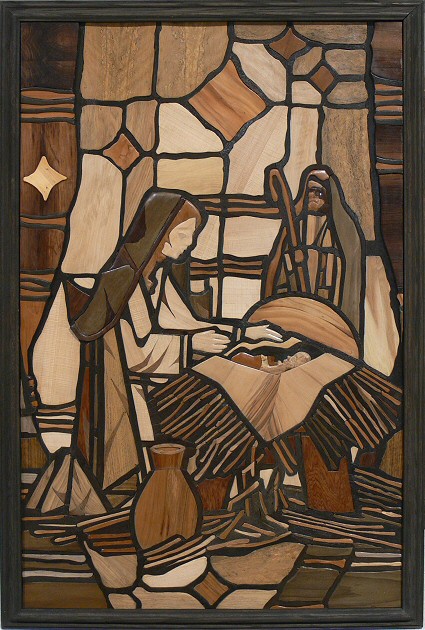 Advent ~ photos on the stump

The stump of Jesse forms the basis of the Advent panel. It was made with a steel frame, covered with chicken wire. Strips of burlap were then fastened to the chicken wire with a podge & glue mixture. The initial intent was to have the burlap on the top of the stump in circular patterns, similar to tree rings. However, it refused to adhere to the chicken wire that way, and thus ended up being ‘stuffed’ into the wire mesh to hold it. The end result gives it a rough, textured look, that we actually found more appealing than our original plan.

About 10 people in total worked on this. Some cut the burlap while others got their hands, and clothes, covered in podge. Another group of people cut out the photos. These had been solicited from the congregation and we received approximately 75 pictures. These pictures were to represent hope and brokenness. The subjects ranged from gardens to ultrasound pictures, to trees and buildings destroyed by storms, from people we loved to sunsets and graveyard memorials. Once the burlap on the stump was dry enough the pictures were then fastened to its trunk and roots, also with podge.

The stump was then mounted to the wall onto metal brackets which had been drilled through the fabric panel into the concrete blocks behind it. The fabric had been hung several weeks earlier, but the stump was hung in the week prior to the First Sunday of Advent. Floyd Elzinga, a metal artist, made the frame for the stump, as well as the shoot which sprouts from the stump, and the vines that wind their way across the mural, which were covered in burlap.

Every person at Jubilee was encouraged to submit a photograph for this Advent artwork. Our mural begins with Advent, the beginning of the liturgical calendar. It is the season of longing and waiting for restoration. In the Old Testament the people of Israel longed and waited in patient expectation for the birth of the promised Messiah. Today, we too wait, not for the first birth, but for the complete renewal and restoration that will come with Christ’s second coming, when he will make all things new.

But today, not all is new. There is brokenness every where we look – in our homes, in our relationships, in our work and in the culture we live in. But amidst this brokenness there is also hope – the hope that is fulfilled in Christ and in his promises of forgiveness, healing and restoration.

So, where and how do pictures fit into all this? Isaiah 11:1 - says, "a shoot will come up from the stump of Jesse; from his roots a branch will bear fruit." On the first Sunday of Advent a stump will be fastened to the Advent panel. This ‘bark’ of this stump will be the pictures we submit. Pictures of brokenness or pictures of hope and anticipation. One of the things we, as planning team hoped for, is that we will get the same number of each kind so they can be paired up on the stump – and so the stump is covered with reminders of pain, loss and suffering on the one hand, and hope, anticipation, restoration on the other.

We have encouraged everyone to be involved , so that when the stump is mounted each person can point to his or her picture and know that whatever they chose to contribute has enriched the whole stump, that every person’s picture of either loss or pain, or of renewal and rebirth, belongs to the body of believers we call Jubilee.

Making the stars was a highlight for many. People loved being able to work with metal, and there was a lot of team work, with parents and children making the stars. It was noisy and fun. We had prepared some samples ahead of time and laid out this work station with wooden boards for everyone to work on. A number of carpenters in the congregation also assisted people in this station. The pieces of metal, steel and copper, were also cut out ahead of time. Each person wrote their name on the back, and drilled a hole into their star. Later on members of VAM hung them onto the mural just before Christmas. We had also bought the large star and painted it to give it a creamy translucent look. Whisps of gold and white chiffon added rays to this main star. When people arrived at church on Christmas morning they were greeted by this beautiful wall of shining stars.

One of our members had gathered a number of dead vine truncks and branches from a nearby abandoned vineyard. Our Advent floral arrangement consisted of two of these truncks formed into an arch. One side of the arch represented hope and the other brokeness. Pictures of these themes from the stump, were scattered at the base of the stump. The broken side was made of moss, etc., and the hope side began with a small spray of tulips and other flowers which climbed the arch nearing the middle by Christmas day.

We also hung one of these stumps on Christmas day from hooks in the ceiling. Seven people then hung their star onto this stump at the beginning of the service. When the spot lights were turned on, the shadow of this stump intersected the floral arch, forming a cross, which was ilumined on the projector screen throughout our Christmas day service. We had not planned this at all, but were amazed and moved by it.

The Epiphany wall is covered with artwork depicting the seven “I Am” statements by Jesus. They were drawn by the Sunday School children one Sunday in the fall. At the studio session adults were invited to finish these children’s drawings. They were given crayons, pencil crayons, pastels, tissue paper, and magazines from which to rip or cut paper or pictures. The children seemed to have a preference for “I Am the Good Shepherd,” and “I am the Vine,” so we ended up with at least half a dozen of those two sayings, but only one for “I am the Door,” and “I am the Way, the Truth and the Life.”

Planning the Lent panel and the Lent worship services provoked the most intense discussion about the mural. While as Visual Arts, we could grasp what the intent of having palm branches cut out of purple and laid on black, was all about, articulating this so that it made sense to others, was hard work. It made us realize how important it is to be able to explain the purpose behind each season's part of the mural.

The entire mural is intended to chronicle the life of Jesus, who is the Living Vine. From the shoot that comes from the stump of Jesse - the promise of a Saviour, each panel continues the story with his birth, life, death, resurrection, ascension, and sending of the Holy Spirit. The image of the palm branches cut from purple with the black showing through them, was the panel in which we confessed our own misunderstanding of who Jesus was and is, and how we, like the people who waved palms and shouted Hosanna's 2,000 years ago, sometimes want Jesus to be what we want, rather than who he is.

We wanted the vine for the Lent mural to be dramatically different from the vines preceding it, to make it distressed and representative of the suffering Jesus would endure on our behalf. The real vine trunks with their gnarled ends were ideal for this.

The mural then turned the corner following the balcony railing. We covered the black fabric here with black burlap to continue the rough, tormented theme. The crown of thorns was made of the cut outs of the palms from Lent, again recreating the way the palm-waving masses shouted 'crucify him' only six days after shouting 'hosanna."

The balcony was covered with strips of cloth, moving from dark purple for Lent, to black for Good Friday, and to pale creamy pink for Saturday, the day Jesus was in the grave. A few red ribbons behind the cross represented Jesus' shedding his blood for our sins.

The cross itself was made in Floyd's shop and was suspended from the ceiling, spanning the balcony railing. The vine at its most distressed look, hung over the arms of the cross.

This panorama of Jubilee Fellowship’s worship space was taken just after Christmas, 2010.
The mural, wrapping around the back, takes up more than half of the panorama.

Hover over the hot spots in the panorama to see a detail view tooltip.
Click the hot spot to open a large popover view, along with some descriptions
of panels and the process of making them.

This mural project was made possible through a Worship Renewal Grant from the
Calvin Institute of Christian Worship, Grand Rapids, MI,
with funds provided by the Lily Endowment Fund. Inc.

This iPanorama 360 viewer plugs into WordPress and offers an easy way to display the panoramas that I’ve been taking, off and on, since 1974. For a full screen view of the panorama click on the double arrow icon, lower right.

Taking the Wide View: These panoramas are mostly just casual, hand held affairs. taken on the spur of the moment to preserve a wide view that I found particularly appealing
FacebookTweet